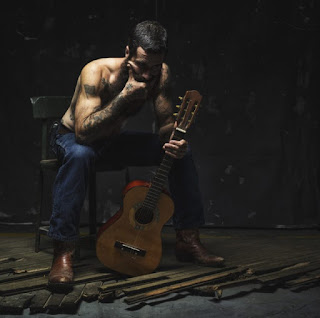 There's a wonderfully long history of political folk songs that skew more humorously than angry. Joining this pedigree is the latest from JP Harris. "Take Off Your Tinfoil Hat" is a ramblin', upbeat folk/country song about all of the right wing QAnon conspiracies that seem to be destined to never die. Harris just takes all of these theories into an ongoing string with one after another until the chorus (which also includes some), and then starts up with some more. I'm pretty sure some of these are fake... but who even knows any more. "Take Off Your Tinfoil Hat" is a fantastic tongue in cheek song that somehow finds the humor in a subject matter we're all pretty sick of by now.

"It seems as we become ever more connected, with an infinite wormhole of information at our fingertips, that as a species we are rapidly losing our ability to discern truth from fiction, our most valuable learned skill of critical thinking, at what could almost be called the genetic level. Our technology is evolving faster than we are.

"It is sad to say that the precedent to believe the most outlandish conspiracies has been long established; MK ULTRA, the Tuskegee Experiments, the CIA’s counterintelligence program, and countless other declassified examples of shadowy governmental behavior give people the thread of doubt they need to latch onto something they can fight for.

"And with very few legal consequences enforced or even in place by the Federal Communications Commission for spreading false information, the Kremlin-style 'Fake News' label and shock-jock reporting have emerged as the only allegedly-trustworthy reporting for those right of center, steering an enormous headcount of Americans away from balanced and factual reporting. Can’t we just change the slogan to 'Make Conspiracies Believable Again'?!”

You can listen to "Take Off Your Tinfoil Hat" below. The song is available now via Free Dirt Records here. For more on JP Harris, check out his website.