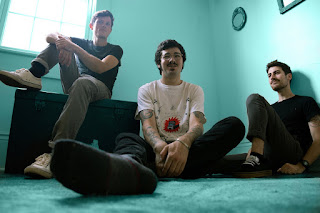 Every now and again we come across a new band that with just one single, we know we're going to become obsessed. The song is just so strong that we immediately drop everything and fall into a wormhole for that band. The latest is Kelly Duplex. The New Orleans band have issued a new single, "Shreveport." It's just three and a half minutes, but Kelly Duplex cram a career's worth of music into that time. It's a heavily 90's indie rock influenced track, and sounds like if you combined Archers of Loaf with Weezer (90's Weezer, I should specify...) The song is frantic at times, melancholy at others. But the entire thing is obsession worthy.

"Shreveport is an examination of unexpected loss and how we carry it as an un-shareable weight for (what seems like) an endless amount of time- falling into the hindsight trap of feeling that we should have seen the unexpected as an inevitability. It’s about the pieces of ourselves we choose to shed for better or worse and accepting that as a form of loss as well. Reflecting on the shared losses that can come to define our relationships and the vulnerability of navigating a path forwards when what we want to avoid is the thing we’re reactively trying to carry alone."

You can listen to "Shreveport" below. Kelly Duplex's self-titled album is due out on February 12 on Strange Daisy Records. You can pre-order a copy via Bandcamp. For more on Kelly Duplex, check them out on Facebook.