Kinnie Starr - "Runnin' Right Beside You" 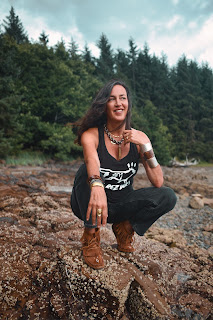 The latest song from Kinnie Starr defies all genres. The Juno winning artist has been making music for twenty five years, and was even signed to Mercury/Island/Def Jam in 1997. Her latest single, "Runnin' Right Beside You," sounds like if an electronic artist decided to try to craft a folk song using electronic instruments, and also combine their indigenous heritage and hip hop. It almost sounds like an organic, stripped down M.I.A. It's a mellow but intense song that you might not be able to resist.

In a press release, Kinnie Starr says of her new song:

“'Runnin’ Right Beside You' is a song about the freedom of potential movement forward after the grand pause of a pandemic."With an aggressive reframe and a push to immediately implement green technologies using indigenous knowledge that we are servants of the land, imagine what the future could look like!"Our leaders are not leading, and people are in a state of unrest. Here in so-called Canada, our government drags its feet on getting clean drinking water into all indigenous communities and on proper management of waste (our garbage could be being properly cared for and re-used for energy like it is in cities such as Stockholm)."Our government has also dragged it’s feet around the truth of residential schools for years, and has not fulfilled even a fraction of the calls to action of the TRC which was launched in 2008."

You can listen to "Runnin' Right Beside You" below. The song is available as a single via Birthday Cake Records. For more on Kinnie Starr, check out the artist's website.

Kinnie Starr · Runnin' Right Beside You
Posted by Ken at 10:00 AM