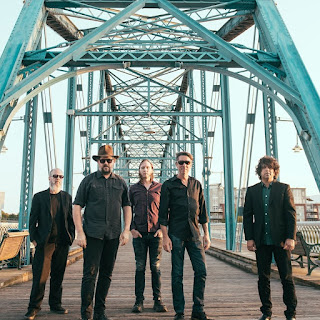 I know, I know. The whole point of these Festival Fridays has been to highlight lesser known artists playing this year's Green River Festival. The band closing out the main stage of the entire weekend isn't exactly lesser known, but they are my favorite active band so how could I resist? The Drive-By Truckers' blend of southern rock with punk guitars is going to blow everyone who sticks around to the end away, and here are the reasons I'm beyond excited to see them this Sunday night.

1. They only have ninety minutes. A typical Drive-By Truckers show lasts from anywhere between two and three hours. Hell, they usually take the first hour to get warmed up before the performance reaches transcendence. What will they be like with a shortened set?

2. I've never seen them at a big, outdoor festival before. I've only ever seen them in clubs and theaters. While clubs are the kind of shows I love the most, sometimes you just want to see certain bands play in front of the giant crowds they deserve to play in front of. Plus, watching the sun go down and the setting get darker as their set goes on fits the Drive-By Truckers' vibe perfectly.

3. This is a band that has never shied away from politics. Of course, for some reason that we'll never ever figure out, that was never an issue until the last five or so years. There will be people looking to avoid politics at a music festival (which seems bizarre to me), but with Sunday also including Ani Difranco, you're going to get at least two sets that don't avoid politics. How heavily will Drive-By Truckers rely on their more recent, more political albums? We'll find out Sunday!

Drive-By Truckers play the Greenfield Savings Bank Stage at 6:00 on Sunday. Somehow tickets are still available for Sunday, and you can find out more information here.