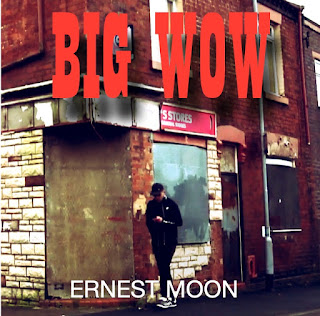 Hailing from Liverpool, Ernest Moon is the duo of Steven Doran and Brian Murphy. Their latest single, "Big Wow," takes that rumbly hard rock blues sound of bands like ZZ Top and George Thorogood and twists it into a very British poppish almost punk sound. That's what makes "Big Wow" so interesting: It shouldn't be anywhere near as poppy as it is. It's heavy blues rock with a T Rex bounce to it. It's a fun song that seems to be dancing across the line of darkness every so often.

Steve Doran says of the song:

"The music in this song is the most obvious stuff a couple of crappy musicians of our generation from Liverpool could produce. In Liverpool there is a tradition for poppy rock'n'rolly guitar music so its natural this kind of tune comes out the other end when you start playing. But there is a diversion from the obvious in the song in that the lyrics are more crafted and worked than one would normally encounter in Pap music. Even if we say so ourselves."

You can watch the video for "Big Wow" below. The song is available as a single via Bandcamp. For more on Ernest Moon, check out the band on Facebook and Twitter.