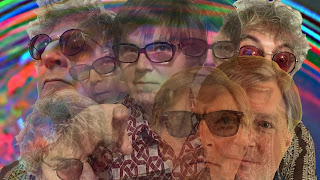 Worcester, MA's own Prefab Messiahs had their original run back from 1981-1983. The band reunited in 2012 and have been sporadically releasing new material since then. According to a press release, they are a "... proto-lo-fi post-punk left-field garage-pop band."

Their latest single, "Bubble," is about living in your own echo chamber/bubble and only ever hearing from people that think just like you do. It's a classic psychedelic garage rocker. If you've ever enjoyed anything else we've brought to you from The Prefab Messiahs, you're going to like "Bubble." It's a trippy rock song with just enough of an edge to it. This type of music is completely timeless and could have come out anytime in the last sixty or so years. (Except for the Bowie reference, which means it can't be more than twenty six year old.)

You can watch the video for "Bubble" below. Music for Concerned Citizens is due out July 9. You can pre-order your copy via Bandcamp. For more on The Prefab Messiahs, check them out on Facebook and Twitter.