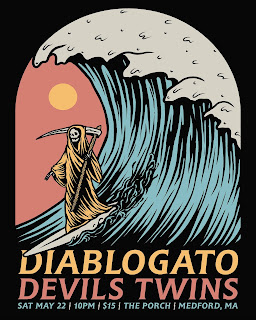 Four hundred thirty seven days. That's a long time to go without seeing live music, especially when you've been going to one to four (or sometimes more) shows per month for twenty (or more) years. But that's how long it had been since I had seen Against Me! in Holyoke, MA on March 11 before everything shut down. But, shows are starting up, and since I'm fully vaxxed I decided to make my very first show back this past Saturday with Diablogato and The Devil's Twins.

The Devil's Twins played a shorter acoustic duo set to start off the night. Obviously it wasn't quite as rockin' given it was just them and an acoustic guitar, but I don't think anyone really cared. The crowd treated The Devil's Twins like they were The Beatles at Shea Stadium. The pure joy felt between the band and the crowd was palpable in the air. I'm not sure if it was the reception or just the joy of getting to play music for a crowd again, but Nicole Coogan needed a few seconds after the first song after she got caught up in the emotion of it. It was truly a lovely moment. We all missed this so much over the past year plus, and it was phenomenal to get it back. The band tore through what could have been a greatest hits set without missing a step from the previous seventeen (?) months. Songs like "Bad Karma," "If You're Gonna Be Dumb," and their cover of Amy Winehouse's "Rehab" have been missed.

Despite Diablogato being a local band, I hadn't seen them live since February 2019 when they played a show with Salem Wolves and The Devil's Twins. Seeing a band I've wanted to see again to help end my quarantine concert drought was perfect. They played their amped up rockabilly injected punk in a way that didn't quite fit the supper club venue that The Porch is. It was definitely a set that would have been better suited to a standing venue and not a sitting with tables one [Edit: I have since found out The Porch is not normally a seated at tables venue but has been due to COVID regulations], but no one was complaining. Diablogato received the same ovation between each song that their fellow band did. If this is what going to shows is going to be like from now on, it's going to be beautiful. After a few songs, singer Drew Indingaro said that even though he's forty four and "... jaded as fuck...," he was still getting emotional.

Once you're fully vaccinated and you feel comfortable enough to do it, get out and see your local bands. We all need this right now.