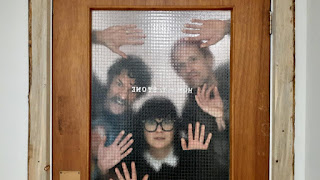 Night Court started back in 2020 when friends Jiffy and Dave started emailing each other song ideas during lockdown. They began recording on a four track, and once they added Emilor on drums Night Court was fully formed. "Titanic" is a one minute 16 second song that is unbelievably catchy indie rock jam (with some punk edge) with abrasive yet endearing guitars. It's a wonderfully messy song that never quite gets too messy and keeps enough pop hooks to have you desperate for more. It's the rare just over one minute song that ends up being the absolute perfect length.

“The original idea was for the song to be about the titanic without any explicit reference to the name ‘titanic’ – a real one minute, 15 second mystery – but then we somehow ended up just naming the song “titanic” and thought that was stupid and funny so we went with it. This has the added benefit of ensuring it isn’t confused with the Edmund Fitzgerald or the S.S. Minnow.”

You can watch the video for "Titanic" below. Nervous Birds Too is due out May 6 via Snappy Little Numbers and Debt Offensive Records, and can be pre-ordered here. For more on Night Court, check the band out on Twitter and Bandcamp.