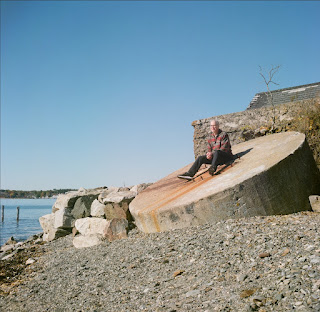 Back in 2005, Kittery, Maine's Guy Capecelatro III gathered thirty musicians in an old gymnasium and recorded an eighteen track album in three days. That album was released in 2012, but apparently there were another nineteen songs from that session, so a second album will be released later this month.

"Wake" is a one minute and seventeen seconds long song that sounds like modern folk despite being recorded almost twenty years ago. It's a quiet and reflective folk song that is too simple to be all that mainstream sounding. It's a song about those moments when your thoughts begin to wander into a dream just before you fall asleep. My only complaint with the song is the short length. Just as you're starting to truly lock in and get sucked in, it ends. Luckily we have an entire album coming next week.

You can watch the video for "Wake" below. Heading North Again is due out April 29 on Dromedary Records, and can be pre-ordered through Bandcamp. For more on Guy Capecelatro III, check out the artist's Facebook.