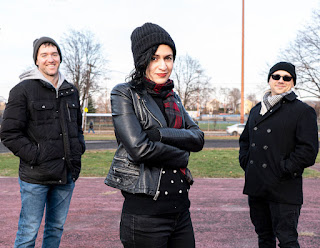 After the extreme cold spell we just had in New England, we're definitely feeling the latest from Boston's The Jacklights. "Winter" isn't exactly an ode to the season, it's more of an ode to hating the season, particularly the stretch between January and spring. As with previous songs from The Jacklights, this new one is straight up pop punk, but leaning more on the punk than pop. Since most pop punk is really smooth and tuneful, I'm even hesitant to call it pop punk. "Winter" is a rough around the edges punk song with just barely enough tunefulness to be considered pop punk.

"'Winter' was inspired by some not-so-great experiences I had over the years. Part of it was a New Years' Eve event I wasn't really enjoying, and part of it is that sluggish, seasonal affective disorder feeling, where even the littlest things feel like more effort. Though I've lived in the Boston area for more than a decade, I'm originally from Southern California, and winter is still an adjustment for me sometimes. It's a time of year when, especially with the holidays, people are supposed to be happy, and it can be beautiful and cozy -- but if you can't connect with that, it just feels isolating. And that stretch between January and spring can feel especially bleak. I think with this pandemic, that's something many people are probably feeling this winter. Despite the subject matter though, musically, the song still has an energetic vibe -- I wanted it to still be fun to listen to, to have some contrast, and not be a complete downer of a song."

You can listen to "Winter" below. The song is available as a single via Red on Red Records. You can get a copy here. For more on The Jacklights, check them out on Facebook.