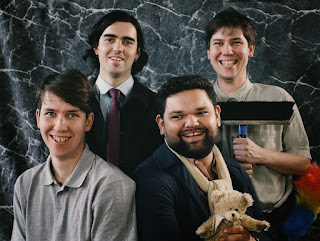 Considering the upcoming album from New Zealand's Hans Pucket is on the same label as The Beths, it was produced by Jonathan Pearce of The Beths, has appearances from other members of The Beths, and they'll be touring with The Beths next year, you'd expect Hans Pucket to sound a lot like The Beths. However, while "Bankrupt" is going to appeal to a lot of fans of their fellow New Zealanders, it's a completely different blend of indie rock. It's still a poppy version of the genre, but it has a much edgier, rock based sound. It has some great tempo swings and guitar solos throughout, along with an absurd level of fuzz and some earworm inducing "oohs!" This is indie rock at its most fun and catchy, and even if you can't get into The Beths, Hans Pucket could just work for you.

Callum Devlin says of the band's new song and video:

"'Bankrupt' might be my favourite song from the album, so naturally I put myself in charge of directing this video. This concept (some form of 'band in a room' video) has been banging around my brain for over a year. I’d been holding on to a lot of misplaced fear and dread around this album release, which I think led to this very dark tone. Annabel shot the hell out of it, and our skeleton 'Prince Phillip' really stole the show. It was a truly cathartic experience, getting to electrocute the band for this video. Any fear is now gone, I am ready for the album to come out now."

You can watch the video for "Bankrupt" below. No Drama is due out November 4 on Carpark Records, and can be pre-ordered/pre-saved here. For more on Hans Pucket, check out the band on Facebook and Twitter. Upcoming tour dates with The Beths are below the video.