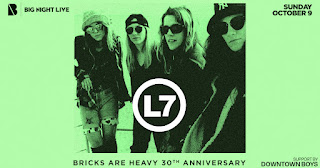 L7 are one of those bands I've known since high school but I had just never gotten to see them. I think I realized that a few years back and became determined to see them, but it just never quite worked out. Finally schedules aligned and I was able to see these absolute legends live.

First, let me just say how much I hate Big Night Live as a music venue. The name itself is terrible and sounds like it was spit out by an AI or at least a corporate pitchman who's at least in his seventies. Being right in the TD Garden doesn't help, and it's just a giant corporate music venue with no real personality. There seemed to be sound issues all night, with the bass turned up far too high, bassist Jennifer Finch's microphone barely on at times, and a buzz that lasted throughout almost the entire night. Let's hope they go back to the Paradise next time they come through town.

The true draw of this tour was the thirtieth anniversary of their huge 1992 album Bricks Are Heavy. They played the album from start to finish, which is always a good time. This lead to their biggest hit, "Pretend We're Dead," being the third song they played and singer/guitarist Suzi Gardner announcing that if anyone leaves after the hit they would be tracked down. Obviously no one did. It's easy to forget how amazing this album is with all eleven tracks sounding like hits from the stage. Even B-sides like "Diet Pill," "Monster," and "This Ain't Pleasure" were monsters live. It's no wonder they've always appealed to fans of grunge, punk, and metal.

Once the required playing of Bricks Are Heavy was done, the L7 hands logo banner dropped and was replaced with the block letters in a circle one. The band also seemed to relax a bit, and kicked in for another ten killer songs. With an album like Bricks Are Heavy, it's easy to forget that they have a whole career of killer songs, but they reminded us with songs like "Andres," "Shove," and "Fast and Frightening." At one point they asked if Gail was in the audience, meaning Gail Greenwood of Belly and L7 bassist from 1996-1999. Turns out she was in about the third row just rocking out as a fan all night. The band came back with a one song cover of David Bowie's "Suffragette City" and used it to implore fans to get out and vote next month.

Providence's Downtown Boys opened with a blistering thirty minute set. They started out by handing out resources to get free birth control, which is exactly what I'd expect from the highly political punk band. As political as they are, the "I'm just here to rock" crowd was easy to spot with arms folded and not moving at all, but they won over the majority of the crowd before their set was done with songs like "A Wall" and "Wave of History." Towards the end of their set Victoria Ruiz climbed from the stage to sing in the crowd, much to the chagrin of the venue security. But punk rock is punk rock, and Downtown Boys ended their part of the show by asking the crowd to aid and abet abortion, which I assume most of us already planned to.