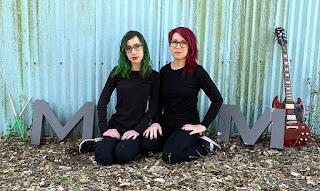 Lalena Fisher is a visual artist and children's book author. She started off in Houston with her band Catbox, then relocated to New York and co-founded the Hissyfits and later The Color Guard. After she had her daughter Annika, the family relocated to Austin. Lalena hoped her daughter would share her own love of music, and also hoped she would play the drums so they could play together. She did, and now they are a duo that goes by The Mothermold.

According to their press release, The Mothermold are "Metallic Art Punk," and that describes their new single perfectly. "Mary Jane" is a big rocker that dips heartily into metal while staying true to both punk and art rock. Maybe it's just the fact that they're a duo, but I'm reminded of Partner's alt-rock meets prog rock era. This is a fun rock song that you can hear the Fishers having a blast on. You know how sometimes you just want to rock out, but you want the song to be a little more than just a dumb rock song? "Mary Jane" is that kind of song.

On the Bandcamp page for the song, The Mothermold say the song is:

"A rock anthem marking the different stages of a woman’s life, by way of a classic shoe in all its variations."

You can listen to "Mary Jane" below. Flesh of My Flesh is due out October 28. For more on The Mothermold, check out the band's website.

Email ThisBlogThis!Share to TwitterShare to FacebookShare to Pinterest
Labels: flesh of my flesh, Ken Sears, mary jane, the mothermold