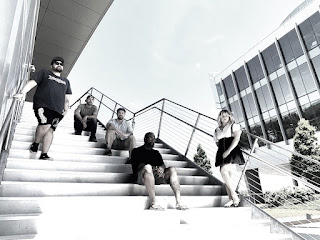 We're always going to bring you anything that is Walter Sickert & The Army of Broken Toys adjacent, especially when it's just this great. dropbear features Tee Jay (former drummer of the Army of Toys), along with members of Rio Bravo, Some Cities, Hold This Moment, etc., so while this is their debut single as a band, they've been kicking around the Boston scene for a while. "Bystander" has this fantastic 90's infused alt-rock sound. It's heavy without being metal (although there are some metal elements in the song) and melodic without being even remotely pop. To me it's sounding like if Hum decided to try out shoegaze and then gave up halfway through. This is a truly impressive debut single, and we can't wait to hear more from dropbear as soon as possible.

“I think the direction in sound is definitely going the ‘90s alternative and shoegaze route, but also eventually incorporating some more modern influences as well. All of us have a diverse background as far as the type of music we play and what we listen to, so songwriting from here on out will most likely evolve. ‘Bystander’ was the first song written; it's the first track on the album, and it encompasses everything we love about ‘90s alt rock – catchy spacey riffs, a bit of shoegaze, loud driving drums and a few little off-time sections and chuggy riffs.”

You can listen to "Bystander" below. Spiralized is due out July 22. For more on dropbear, check out the band's Facebook and Twitter.