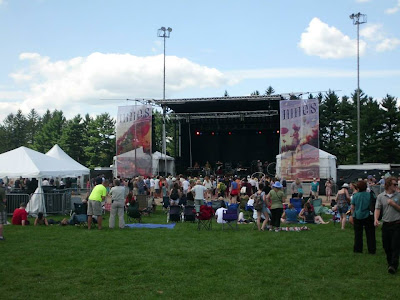 For the inaugural Nines Festival, 10 diverse bands were brought to an athletic field in the middle of a decommissioned military base that has never hosted a music event of this size. It could have been a recipe for disaster. Instead it was a fantastic day of music and arts that will hopefully be the first of many to come.

Upon walking into the venue, I was struck by how much art was integrated into the festival immediately. Installations and dancers were the first thing we came across before we even got into the main area. The main stage was set up right at the home plate of the baseball diamond, which created a fantastic natural line: People could stand in front of the stage on the dirt, while blankets and chairs stayed back on the grass. It probably wasn’t done on purpose, but it was the happiest of accidents. 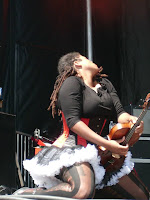 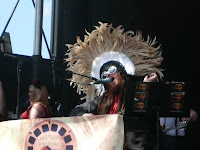 First up was Walter Sickert & the Army of Broken Toys, who were an interesting choice to say the least. As much performance art as they are music, they mesmerized half of the audience and confused the other half with their blend of punk, folk, cabaret, burlesque, and indie rock. Filling virtually the entire stage with as many dancers as actual musicians, they set the tone for the rest of day. There was no better act to open a “music, arts, and discovery festival” than the Army of Broken Toys. The easy comparison would be the Dresden Dolls, but they’ve always seemed to come across a bit too pretentious and serious for me. Walter Sickert & the Army of Broken Toys had none of that, and showed that art can be fun. Their cover of “Paint It Black” sucked me in. Another cover, “I Put a Spell on You,” closed their set with most of the act in the crowd.

Another highlight of the festival was the Stitch Comedy Tent. Curated by Rick Jenkins of The Comedy Studio in , it offered rotating shifts of six of ’s upcoming comedians. I saw the first three acts – Ken Reid, Bethany Van Delft, and Erin Judge – all of whom had unique styles and viewpoints. For a stage lacking huge, national names, it was always packed during performances. What started as a way to get out of the sun for most attendees quickly became a highlight of the day. 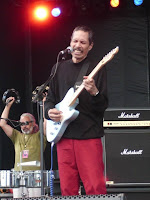 Shuggie Otis was up next on the main stage. The funk/soul legend, who just released his first album since 1974, battled some sound issues (or maybe just an early set time), but quickly settled into a great groove after a few songs. Seeing a classic artist back on top of their game is always one of the best parts of any festival. For someone without a huge amount of name recognition, he won over everyone that made it out early enough to catch his 2:30 set time.

Next we headed over to the Lucky Cat Stage for Matt Pond. I think most of the crowd expected a singer songwriter, as the vast majority of the crowd planted themselves on chairs and blankets. That seemed unusual, as Matt Pond brought pure power pop in its finest modern form to the festival. Songs like “Hole in My Heart” are hardly blanket and chair songs, but Matt Pond kept the momentum of a great music fest going.

Walk Off the Earth had by far the most people wearing their t-shirts of the day, and I just don’t get it. To me they seemed little more than an internet video combined with Barenaked Ladies 2.0. Apart from their 5 people on 1 guitar novelty cover of last year’s hit song “Somebody That I Used to Know,” they seemed like a less edgy version of Sublime’s more radio friendly songs. I was definitely in the minority, as the rest of the crowd was more energized than they had been all day. This lead to my one true complaint of the festival: If you weren’t enjoying a band on the main stage, there was not much else to do to avoid them. The artist section was right at the back of the main stage area, and it was too loud to really talk to the artists about their work. 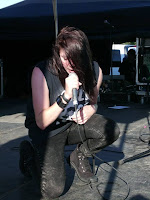 After unsuccessfully avoiding Walk Off the Earth, we headed back over to the Lucky Cat Stage for K. Flay. She brought the most energy I had seen of the day at this point, drawing a small but extremely dedicated crowd into frenzy. You never know how hip hop will translate live, and you really never know how indie hip hop will translate live. We’ve all seen shows where the rapper hits play on a computer before starting, or a “DJ” puts on a record and does little more. K. Flay was truly an act to see live, giving it her all with a DJ and live drummer. Her performance brought the closest we saw to a punk edge all day, with songs like “Rawks” and “Starfvcker.” The only odd moment is when she chose to play part of a Drake song in the middle of her own, and do nothing but let the crowd sing along.

Delta Spirit absolutely crushed the main stage. Their albums have always been a little too precious for me, but live they are a beast. It could have because this was a one off show that got them out of the recording studio for the day. The band was thrilled to be performing live, and rocked far harder than the “indie folk” moniker would suggest. Live their songs go from cute to absolute epics that threaten to become stadium rockers. Please go see them live when they hit your town. 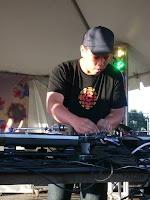 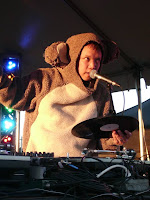 Closing out the Lucky Cat Stage was turntable legend Kid Koala. As most “DJs” these days are more adept with their laptops, it was refreshing to actually watch one with mastery of a turntable. I think he sensed the crowd wasn’t used to the art form since he gave a quick tutorial of how turntables worked and explained what he’d be doing before he started. He chatted up the crowd between songs, telling stories behind the mixes, which of his many projects different songs were attached to, and family stories. The best crowd reaction was when he explained he had lost a bet and had to wear his Yo Gabba Gabba costume at 100 shows while performing his song from the show. The toddlers in the audience were in heaven, and so were the grown adults who performed the dance for the song.

As the sun set on the night, Dr. Dog took the stage. Their blend of psychedelic indie-folk was a bit too polished for my personal taste. It wasn’t bad, it just… was. They have an extremely devoted following who drank in every song like it was the essence of life. The longer they went on, the more they slowly won me over. It didn’t make me a fan by any means, but they were adequate enough.

Explosions in the Sky were the perfect way to end the evening. Heavy enough to keep everyone energized but calm enough to let us re-renter reality, they reminded me of early Smashing Pumpkins: Beautiful and aggressive. As the lights of the stage bathed the field in a multicolored hue, you could still gaze at the stars above and the beginnings of the annual Perseid meteor shower.

For a first time festival, it was nearly perfectly run. Next year, as word of mouth spreads, this is sure to become a highlight of the music scene. 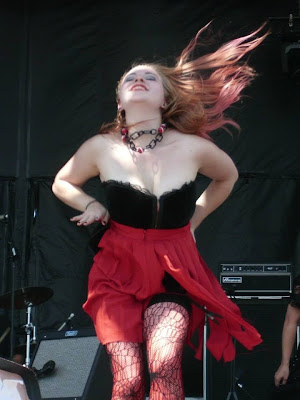