1. A truly diverse line up
Even “diverse” line ups tend to be pretty homogenous lately. Most festivals feel thrown together with whatever the big names of the moment tend to be, plus maybe a rapper. Because of this, you get a lot of bands that are pretty interchangeable and nothing unique. The Nines has done the opposite. Of all the bands, you can’t really point at any two and call them the same. Hip hop is always an iffy thing with festivals, as most just throw on the token rapper and call it a day. With both K Flay and Kid Koala performing, hip hop has a home, and two completely diverse sides are shown.

Ok, I’ll admit it. As soon as I saw K Flay’s picture and read her bio, I completely judged her. I think I was still feeling the burn from getting excited about Kitty Pryde (now Kitty), and then hearing really juvenile beats and lyrics. Most alternative rap today is either trying to be Jay Z and Kanye with lower production values, or people that can’t rap trying desperately to be comedians and making nerdy references. K Flay is neither of those things. She is legit, and an absolute blast. I’m guessing the Creepy Old Guy Factor will be at an all time high as I crowd in with the teenagers and college kids for her set, but it will be worth it.

3. Art
Art at a summer music festival usually consists of the body painting booth and homemade pipes. The Nines Festival has actual visual artists displaying their wares, as well as performance art. Art vendors will take up the entire backside of the venue in a way I have never seen before. I’m making plans to get there early just to take all of them in.

4. Stitch Comedy Tent
I’m a huge fan of the Comedy Studio in . It provides an intimate feel and one of the best ways to see upcoming comedians. Rick Jenkins always brings in a completely diverse line up every single night they are open. Plus, no one in the audience gets drunk and tries to hijack the show. I personally can’t wait to check out the Stitch Comedy Tent that he is hosting at The Nines. The Comedy Studio only holds 75 people (I’m actually shocked the number is that high), so it will be great to see this group of comedians on a larger stage. I can’t recommend enough the combination of Ken Reid, Bethany Van Delft, and Erin Judge.

I had almost forgotten about Kid Koala. With the current popularity of superstar DJs out there, of course The Nines added one. But they did one better: Kid Koala is actually a turntablist. Turntables are almost a forgotten art form in the days of gimmicky DJs just plugging in a laptop or an iPod and pressing a few buttons. It will be great to see a true legend of the craft at work.

6. Being able to get there in 30 minutes
Goofy reason, sure. But unless I want to see cover bands or screamo at the Palladium, I usually have to drive over an hour for a show. This will be so nice.

7. Explosions in the Sky

Explosions in the Sky have always been one of those bands that intrigue me, but whom I’ve never really gotten into fully. It’s not the instrumental thing, as I consider myself a fan of bands like Pelican and Mowai. I’ve been assured that they are one of those Bands You Need to See Live, but I’ve never been willing to take the chance financially or time-wise. That’s the beauty of festivals: having a chance to become obsessed with a band you would never see otherwise.

8. Not having to select between bands I want to see
At every festival I’ve ever been to, there are always two bands I desperately want to see playing at the exact same time. You either have to choose between bands, or cut out halfway through one to see the other, and you always end up missing something amazing. The Nines is set up old school Warped Tour style: Two stages pretty much right next to each other with bands playing right after the other. The only thing I have to decide is what band to miss in order to check out the Stitch Comedy Tent and the visual arts area.

9. Figuring out what is going to happen between 9:00 and 9:45
Between the two stages, the music is non-stop all day from 1:00 on, except for 9:00-9:45. After Dr. Dog finish up on the 9 o’Diamonds Stage, there is no act scheduled for the Lucky Cat Stage. They can’t have eight hours of straight music and then have a 45 minute break just before the headliner, can they? Can they?? There MUST be something planned. Of course, I am just assuming here. It could all be one planned bathroom/dinner break, but I am curious.

For more information or to buy tickets, head on over to www.theninesfestival.com. Tickets are $55, free for kids under 10. There is also a $115 VIP option with premium parking, air conditioned bathrooms, and complementary hospitality throughout the day, as well as other benefits. If you’re obsessive like me, check out a map of the festival layout below. 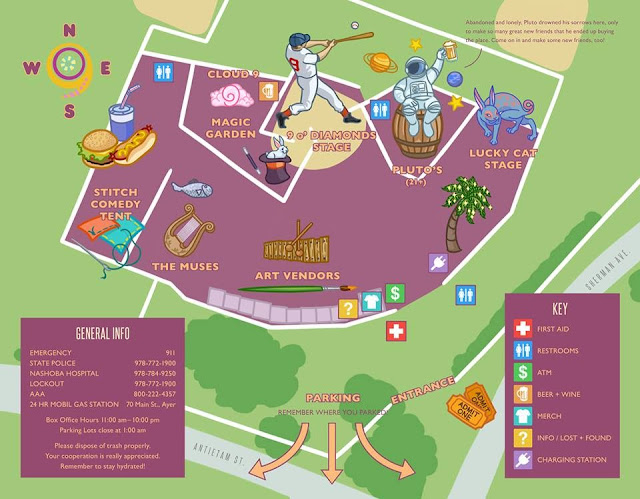