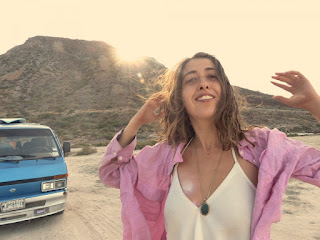 Our newest favorite Australian export, Gabriella Cohen, has released the latest single off of her upcoming album. "Music Machine" isn't quite as much fun as "Baby" was, but we're still digging it. Cohen's 90's slacker style vocals are even more monotonous on "Music Machine," and we mean that in the most complimentary way possible. The part that will suck you in is when the backing vocals, which have been merely peeking in here and there throughout the song, come in full force in the second half of the song. I could describe the song in more detail, but I think Cohen's words about the song basically nail the vibe:

"'Music Machine' was born about the time when I came back from my first U.S tour and found myself down and out crashing on a friends couch in West Brunswick, Melbourne. It was a strange patch of time, where I felt comically displaced, coming from the glitz and glamour of New York straight to desolate suburbia and Centrelink queues.

"Maybe it was the weather, or the jet lag, but in that short time I felt drugged, hazy; I got lost far too many times on bike paths, dry gusty December heat blowing me through parks and scrubland.... In my delirium, I went on my first Tinder date and, thank g-d, because I made a very good friend who led me to a farmhouse where I would record Pink Is The Colour Of Unconditional Love. All in all, "Music Machine" was written out of a delirious boredom, and in turn became a song I'm grateful to have written."

You can listen to "Music Machine" below. Gabriella Cohen's new album, Pink Is the Colour of Unconditional Love, will be out June 1 on Captured Tracks. You can pre-order it here. For more on Gabriella Cohen, check her out on Facebook and Twitter.