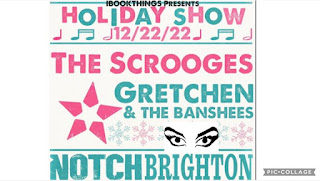 As much as I love cover songs, I typically avoid cover bands. The whole thing has this forces nostalgia factor I can't get behind, and I'd rather spend my time seeing original bands instead. Of course, seeing as The Scrooges are Boston's premier Santa themed Stooges cover band... how can I resist that?

The Scrooges have been kicking around for more than twenty years at this point, reforming every December to play the music of The Stooges while wearing Santa suits. At this point they're a Boston tradition and institution, but somehow I've never seen them live before. After my first time seeing them, I'm pretty sure I'll be making this an annual tradition from here on as long as they keep doing it. Seeing some of the finest Detroit protopunk being performed by a band in Santa suits with a beer swilling lead singer is more fun than it sounds, and it sounds like a lot of fun. They opened with "I Wanna Be Your Dog" in a bold move since that's probably The Stooges' most known song. From there the band played other favorites like "1969," "T.V. Eye," and "Search and Destroy." To get singer Dave Unger back for an encore, the crowd started a chant of "Santa! Santa! Santa!" which is just magical.