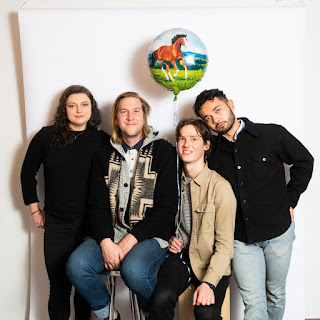 Seattle's Megadose have created a song that is both so close to being a mainstream alt-rock song and nowhere near being mainstream. "Pigs" follows a lot of the typical alt-rock tropes, but also just goes slightly off? It's not quite quirky, but it's definitely weird. It's kind of like your favorite K Records band decided to write a big major hit song and ended up with this. Of course, that's kind of what makes "Pig" more fun than your normal indie rock song, and indie rock could use a lot more fun to it. Plus, this is just a groovy song that you're going to want to dance to, or at least do a little shimmy.

"When recording 'Pig,' our main goal was to make the whole thing feel like it was constantly one too-tight corner away from going off the rails.

"The song's about an actual person in my life, but I kept the lyrics intentionally ambiguous to hopefully make the listener think (it is about cops? a cheating husband??). The general message is meant to be pretty clear: men, even the seemingly upstanding ones, have a sickening capacity to be, well, pigs. I think the resulting feeling is a little like having your best friend throw their passenger door open and say 'STRAP IN,' before peeling out to go egg your high school bully's car, then maybe do some donuts in the parking lot."

You can watch the video for "Pig" below. Heating Up is due out January 20. For more on Megadose, check out the band on Twitter and Instagram.