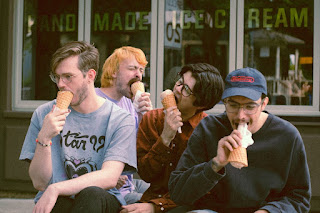 Portland, OR's Swiss Army Wife keep up the longstanding emo/pop punk tradition of referencing pop culture with a song title. "Aight, I'mma Head Out" also mixes early emo with modern emo and the edge of early pop punk. The song has a little bit of the discordance you would get with bands like Jawbreaker with the smoothness and pop hooks of early 2000's pop punk bands, but vocalist/guitarist Kade Dale is unleashing this scream that is almost too in your face to not be just a little grating... in the best possible way. This is the kind of emo and pop punk (with a smidge of hardcore) that even those that pretend that they're above the genres will be forced to like.

“‘Aight’ is the first song that this iteration of Swiss Army Wife wrote together. It started from the intro riff, something Will was just playing at practice, and we kinda spun it out from there. So it’s fitting that it ended up becoming this manifesto about who we are and what we value: community building, inclusivity, and the creation of safe creative spaces. We always dedicate this one to our friend JJ, who books DIY shows here in Portland. We saw the incredible community that people like JJ were fostering, and wanted to write something that acknowledges how special the scene we’re in is while recognizing that like all things, it’s impermanent."

You can listen to "Aight, I'mma Head Out" below. Medium Gnarly is due out January 6 on Really Rad Records. The album can be pre-ordered through Bandcamp. For more on Swiss Army Wife, check out the band on Twitter and Instagram.