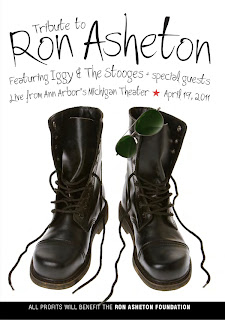 Recorded live at ’s Michigan Theater on April 19, 2011, this DVD documents the tribute concert performed by Iggy & The Stooges for Ron Asheton, the late Stooges guitarist who passed away in 2009. For something that could have been such a somber occasion, the performance is anything but, which makes it the perfect tribute for Rolling Stone’s 60th Greatest Guitarist of All Time.

The concert begins with a 20 minute introduction by Henry Rollins. After explaining the creativity Ron’s playing style was and how much The Stooges mean to him (and sharing a story about introducing The Stooges to a young, foreign fan), Rollins joins the Stooges for the opening song, “I Got a Right.” Iggy immediately takes over frontman duties, and dispels any concern this will be a sedate performance by bringing enough fans onstage to fill the entire stage (complete with crowdsurfers) by the 4th song, “Shake Appeal.” The Stooges run through 20 total songs selected from their 3 studio albums. The band is even joined by full string and horn sections for the encore.

Iggy & The Stooges give their all in this performance for their fallen bandmate, and the energy is palpable even on your home tv. My only complaint is there is one stationary camera that faces the stage from a distance head on that looks like it might have been recorded with a webcam. Other than that, it’s a must own for any Stooges obsessive.