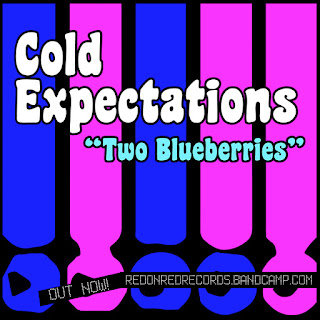 It's been a little over two years since we've brought you any new music from Boston's Cold Expectations, but luckily the drought has ended and we have a new song. Previously their music was a Hank Williams/Rolling Stones mixture, with just a little 90's alternative to it. This time they're describing "Two Blueberries" as "... a contemporary take on a fun 70's-style bubblegum pop song." That does describe the song perfectly. It's a jangly pop song that calls to mind bands like Big Star and the Ramones covering oldies. It's wonderfully sweet in a way that stops just short of being saccharine, and maybe just the slightest edge possible.

"It’s about the ordinary, everyday stuff that happens, like a pint of berries spilling out, becoming whole universes and planets spinning around on the kitchen floor. It feels like you and me, spinning out in space. Little things. Nervous things. Bittersweet things. Two Blueberries is also about creating and what I learned about creation; I learned that songs once written can be torn up and re-written, given a fresh meaning. Paintings that once meant something, then mean nothing, well you can un-paint them and get a fresh coat. New beginnings, life and all its weirdness, and the in-between spaces of everyday loneliness and anxiety (just a touch, for good measure)."

You can listen to "Two Blueberries" below. The song is available as a single now via Red On Red Records. You can get a copy via Bandcamp. For more on Cold Expectations, check them out on Facebook.