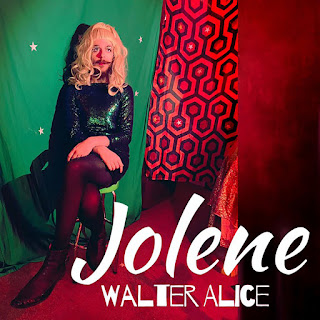 Dolly Parton's "Jolene" might be the best song ever written. It's at least top two. Unfortunately, for too many of us that grew up in the 1980's, Parton was seen as a punchline, especially for those of us that hated country music. It was The White Stripes' cover of "Jolene" that sucked me into all the joy that Parton brings to the universe, so I'm always going to be partial to any cover of that song.

On Saturday morning, I woke up to an email announcing that Walter Sickert had released a cover of "Jolene." Knowing Sickert's work, I knew exactly what to expect. It was going to be a dark, creepy version, maybe even leaning towards the White Stripes' version. What I didn't expect is that it was going to be beautiful. Sickert's version is stunning, and completely heartfelt. Sickert takes the song and sings it in such a way that you believe they're in danger of losing their man to a redhead named Jolene. Sickert's version may be dark, but the song is already dark, and when you inject their vibe into the song, it's going to get even darker. It's hard to bring something new to a song that is so well known and frequently covered, but Sickert turns in a masterpiece of a version.

You can watch the video for Walter Sickert's version of "Jolene" below. The song is currently available on Bandcamp. For more on Walter Sickert & The Army of Broken Toys, check out the artist's Facebook and Twitter.