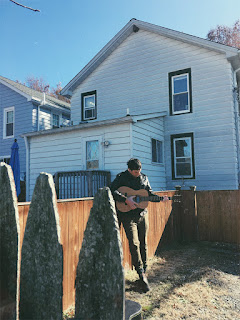 Ex-The Pains of Being Pure at Heart frontman Kip Berman has released a new single from his new project The Natvral, and it continues his movement away from his previous band's sound to a more folky one. In fact, "New Moon" is pure folk. "New Moon" is just vocals and acoustic guitar, leaning heavily on vocals. It's a lovely, quiet song that's definitely a strong divergence from his previous band's sound. The rock band frontman goes acoustic/folk solo act is a pretty standard trope, but no one is going to complain when it's done this well.

Kip Berman explains the meaning behind the new song:

"A friend of mine used to date a kind-hearted, but poor musician. At some point, their relationship ended and she went on to marry someone that offered a bit more stability - and asked me to sing a song at their wedding. I gladly sang the song she asked me to, but that experience led me to write another.

"I didn't mean to sympathize with her ex - though it's hard not to. And I didn't mean to say she chose something wrong for herself, because she’s better suited to her new person. But I just wanted to get at that moment when you know love isn't going to be enough, and it's time to say good-bye."

You can watch the video for "New Moon" below. Tethers is due out April 2 on Kanine Records. You can pre-order a copy here. For more on The Natvral, check out the artist's website.

Email ThisBlogThis!Share to TwitterShare to FacebookShare to Pinterest
Labels: kanine records, Ken Sears, new moon, tethers, the natvral, the pains of being pure at heart