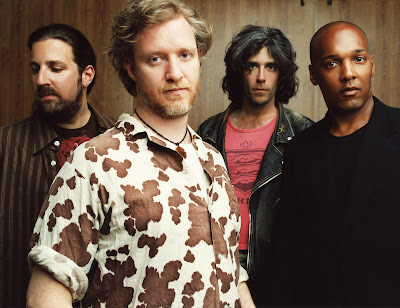 Can we be honest with ourselves and admit that the Spin Doctors were killing it back in the early 1990s?

We all know, and are probably sick of, "Two Princes." I somehow got "Jimmy Olsen's Blues" stuck in my head a few weeks ago and threw on their greatest hits compilation (embedded below) and was immediately struck by how solid a lot of those early songs were. Between the three big singles on the first album, Pocket Full of Kryptonite and two massively underrated singles from the follow up, Turn it Upside Down, it's almost too bad that they blew up as quickly as they did. It clearly stunted them in a lot of ways, and that's too bad, because we don't get the same kind of nostalgia trip for them as we do for similarly positioned bands like Toad the Wet Sprocket or the Gin Blossoms.

They still perform and occasionally record today. I'm pretty sure lead singer Chris Barron was involved with The Moldy Peaches for a time, too, which is just...weird. And unexpected. But mostly weird.

Anyway, if you want to flash back a bit, here's their hits collection. I promise you that "Cleopatra's Cat" is better than you remember.