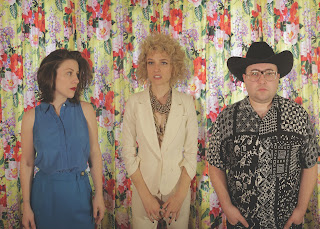 The last time we heard from Washington D.C.'s Priests, they had released "The Seduction of Kansas," which was almost pure pop. Their latest, "Good Time Charlie," continues their foray into pop, but not quite as far. The bad has this to say about the song:

“I like to think of this song a little bit like the Gilligan’s Island Theme song, but for a Hollywood tale of Charlie Wilson. It’s also a little bit about 9/11 but much like Otessa Moshfegh’s My Year Of Rest And Relaxation, the character sketch is more drawn out in its absence rather than presence. I saw a documentary about the history of the United States’ relationship with the Middle East, and there was clip of an 80s lady who looked a little like Vanna White (who turned out to be Joanne Herring) saying how she wanted to get the Mujahadeen guns to fight the communists because she believed they worshipped the same god as her. So I got curious about how this story unfolded, but even more so, how the tale has been told in western culture. I watched the movie Charlie Wilson’s War and it was so unintentionally funny the way they told this story, like think of the movie Team America, except the filmmakers weren’t joking (at least I don’t think). And then I read in the film’s Wikipedia page: “The film's happy ending came about because Tom Hanks 'just can't deal with this 9/11 thing.'” I don’t know why exactly but this got stuck in my head and made my brain feel like it was exploding. So, with Daniele and GL and Janel Leppin on bass, we made it into a song. Hope you like it!”

"Good Luck Charlie" is definitely a dance song, but a strange one. The strangely timed cymbals create an uncomfortable feeling. Plus Katie Alice Greer speaks in a monotone voice through a good part of the song, increasing the feeling that this isn't exactly a party jam.

You can watch the lyric video for "Good Luck Charlie" below. The Seduction of Kansas, the new album from Priests, will be out April 5 on Sister Polygon Records. For more on Priests, check out their website. Current tour dates are below the video.