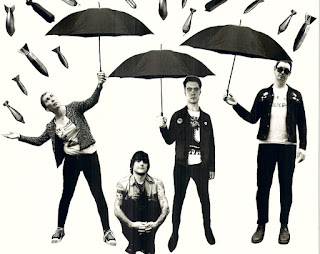 Every now and then we get music submitted to us out of nowhere that blows me away. Era Bleak are the latest band to do that. Their new-ish song (also called "Era Bleak") is this highly danceable burst of post-punk meets riot grrrl. It's as intense as it is fun, which might be my very favorite style of punk. It's loud and obnoxious and just all around glorious.

"The year is 2020 and we are living in a 1980s punk dystopian sci-fi novel. A pandemic is raging. When we are not donning masks to go out in public, we have nothing to do besides smoke legal weed out of electronic cigarettes and lose ourselves in disinformation. The president of the United States is Jello Biafra's worst nightmare... a buffoon so grotesque we would have had a hard time believing the character was realistic had our current reality actually been a 1980s punk dystopian sci-fi novel.
So what better way to kill some hours of unemployment than VIDEO PUNKS! We can't practice! We can't play shows! Going to the grocery store is terrifying! But we all have shockingly good video cameras on us at all times.
Fuck Tiktok! VIDEO PUNKS!!!"

You can watch the video for "Era Bleak" below. Era Bleak's self-titled debut album will be out August 15 on Dirt Cult Records. You can pre-order a copy here. For more on Era Bleak, check them out on Facebook.