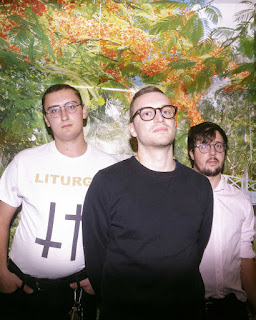 To be fair, I don't know much about Winnipeg except that professional wrestlers Chris Jericho and Kenny Omega come from there. Obviously they're going to have a music scene, but this is not a band I would expect to come from Manitoba. "Exhaling" is the first song on Tunic's forthcoming album. The band's Bandcamp bio calls them "noise rock," "atonal punk," and "feedback laden filth," and I certainly can't argue that too much. But "Exhaling" is hardly the burst of pure discordant noise you'd expect from those descriptions. There are just the slightest hints of standard song structure here and even the tiniest bit of melody, so as noisy and atonal as this song is, it's not a completely challenging listen. You might not even have to be a total noise rock fan to enjoy it, although that wouldn't hurt.

Tunic say about the new song: "Our new song, 'Exhaling,' is about the depression you feel when you're on week nine of an eleven week tour. At a breaking point, you start to doubt every choice you've made, tensions are high, and arguments erupt simply from pure exhaustion."

You can listen to "Exhaling" below. Exhaling, the upcoming album from Tunic, will be out March 2. You can pre-order a copy via Bandcamp. For more on Tunic, check out the band on Facebook and Twitter.