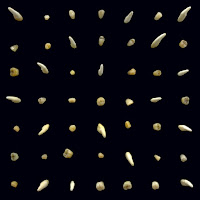 clipping. is a rap group fronted by Daveed Diggs, who played Lafayette in the hit musical. They have a few albums out, but this one is probably my favorite. There's a solid theme that persists through the record, and feels as much a horror story in album form. Yeah, songs like "'96 Neve Campell" are more up-front and mainstream, but then songs like "Something Underneath" bubble up with a manic flow and interesting instrumentation. In a year with a lot of great rap albums, from Run the Jewels to Sa-Roc, this stands out because of how whole the entire package is.

Songs of note: "'96 Neve Campbell," "Bodies for the Pile," "Something Underneath."