Monday Mix (and more!): The Roadhouse Is Proud to Welcome... Music and Twin Peaks! 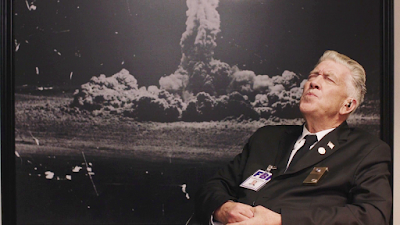 The finale of Twin Peaks: The Return was two weeks ago and my brain is still busted wide open from the entire series. No television show has exercised my brain the way The Return did, and the mysteries that were solved during the season being replaced by new ones has just kept me so engaged in the entire mythology of the Peaks universe up to this point that I see no signs of stopping. I am looking for books that are like Twin Peaks, shows that will somehow fill the orb-shaped void inside of me.

While the music of the original series is iconic in its own right, The Return stepped up in an interesting and unexpected way. While the series itself played around considerably both with ethereal whooshing soundscapes and the use of silence, most episodes ended with a scene in the bar, where the music venue, "The Roadhouse," was hosting all sorts of indie artists. It was almost a game in and of itself to see who would be featured along the way.

Also related were some of the interesting musical discoveries that have come about from my immersion into the whole Twin Peaks thing. So our mix is 20 or so songs from the series, and some extras:


* The playlist. Included in this playlist are some highlights from the show and from semi-related acts...
** Julee Cruise - "Falling": The original theme song, just as strange and haunting today as it was when it was first used.
** (The) Nine Inch Nails - "She's Gone Away": Trent Reznor has noted that he wrote this song specifically for The Return
** Lissie - "Wild Wild West": One of a few "Roadhouse versions" released following the end of the show.
** "Threnody for the Victims of Hiroshima": One of the most striking moments of The Return was during the infamous episode 8, and was soundtracked by this modern classical masterpiece.
** Flesh World - "To Lose Me": A band we've highlighted here before, named after the adult publication from the original series.
** James Hurley - "Just You": Proved what many knew for 25 years - James was always cool.
** Sky Ferriera - "Night Time, My Time": Where I hope she cured that rash...

* I also recommend checking out the following:
** Chrysta Bell - We Dissolve: Bell played FBI Agent Tammy Preston on the show, and she's primarily a musician that David Lynch considers a muse. Her album is haunting and weird and wonderful - a lot like Twin Peaks is.
** Dean Hurley - Anthology Resource Vol. 1: The joke among Twin Peaks fans was the amount of "ethereal whooshing" throughout The Return, and the musician/sound designer who was responsible for much of it has released an ambient score from The Return that is worth your time if you're into it.
** Xiu Xiu - Plays the Music of Twin Peaks: The indie act here released this in 2015, but it's a fun little diversion that's also surprisingly true to the original music.
Posted by Jeff Raymond at 7:30 AM