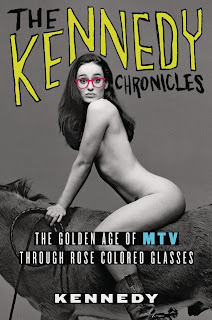 If you're a certain age, you probably hit the sweet spot of MTV - a little after the network finally solidified its image, but before the scourge of things like Total Request Live and the end of the animation block. For me, I probably started watching around 1993, which means I was too young to know much about the personalities of the VJs like Kennedy, but old enough to know who was who at the very least. Kennedy was probably my favorite, if only because she came across to me as the misfit toy of the group - not a model, not a comedian, sort of the nerdy type who wandered in and ended up getting a gig on TV. Now, today, she's a political spokeperson in libertarian circles, and she put out a book about her time at MTV, so I dove right at it.

The meat of the book is effectively the story of Kennedy at MTV. It trades back and forth between anecdotes about working at MTV, getting hired, getting fired, the Beach House, and so on, and contrasts it with some talk of the bands she met of the time, her personal relationships with many of the people involved, and so on. It's a lot of confessional, a little "look how cool I was," and a lot of topics over the 300 pages.

What worked for me was that there were a lot of interesting stories. She spent a lot of time with Trent Reznor of Nine Inch Nails and you get a different feel for him than perhaps the popular sentiment would represent. In what might be the biggest reveal, we get an admission from the lead singer of the Goo Goo Dolls that their hit song "Name" was actually inspired by and about Kennedy, which is stunning. A lot of other interesting pieces about various musicians, and a surface-level inside look at MTV in general? It's not bad, especially in the short chapter bite-sized chunks it comes in.

I do wish the book spent more time on some of the aftermath. I do wish we had a more in-depth look at MTV's operations. Some stories, like the ones with the Red Hot Chili Peppers, feel like they're missing key information that should have probably been disclosed later on. The book's hyper-focus on MTV was a little disappointing, and Kennedy was way too focused on her virginity in the old stories. Really?

Overall, I enjoyed the read. It is far from perfect, but as a fun nostalgia trip, especially as someone who was right in MTV's wheelhouse during a time when Kennedy was on, and as someone who was young enough to not know what anyone else really thought about her? Absolutely worth my reading time.
Posted by Jeff Raymond at 8:20 PM