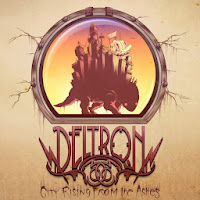 The excitement over the impending new Deltron 3030 album continues to grow with the release of "Melding of the Minds," a new track from the forthcoming album featuring Zack de la Rocha of (formerly of?) Rage Against the Machine. Unless I've missed something, it's the first officially released music featuring Zack since 2008's One Day as a Lion album, so that alone makes this track a big deal. Zack's intensity makes for an interesting contrast to Del the Funky Homosapien's chill style, and neither tries to conform to the other at all. Add that to the Deltron 3030 signature futuristic funk sound, and it's pure alt hip hop gold.

The new album from Deltron 3030 will be out on September 30. Head over to their website for more details. Listen to "Melding of the Minds" below, and after that you can find their current tour dates.