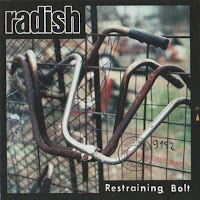 Back in the 90s, Ben Kweller wasn’t a solo artist, but the lead singer/guitarist of Radish, a Texas based grunge (for lack of a better term) band. I don’t remember really having an opinion on Radish at the time, except that I didn’t like them, and I just lumped them in with Silverchair. On a lark I decided to give their major label debut, Restraining Bolt, a listen. It’s far better than I remember it being.

Most reviews at the time call Radish some variation of “Weezer Jr.,” based mostly on the fact that Kweller was 16 at the time, and they play crunchy alternative rock. They’re far more aggressive and nowhere near as quirky as Weezer were at the time, so that’s really where the comparisons end. Radish also pull apart from the 3rd generation Pearl Jam rip offs of the time by not being quite as moody and being far more upbeat. However, Radish just lacks the fun of Kweller’s solo music. I’m guessing that stems from being 16 and wanting to be taken seriously as an artist, but the music suffers a bit from it. One track in particular, “Dear Aunt Artica,” comes across more than a bit hokey with its anti-church burning message hidden in a song with a pun for a name. The album’s hit single, “Little Pink Stars,” is infinitely better than I remember, and stands up with anything in Ash’s entire catalog. Restraining Bolt isn’t as good as Kweller’s solo work, but it’s the rare look into a current artist’s teenage years that isn’t embarrassing.

As of this writing, you can pick up used copies of Restraining Bolt on Amazon for a penny. Might be one of your better 1 cent purchases.