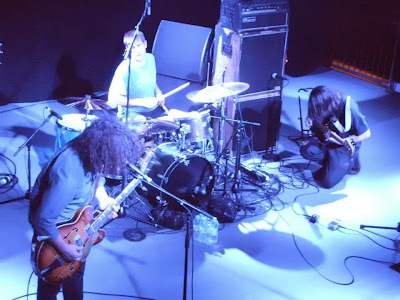 Monday night shows are always iffy, especially for “classic” bands. Most of my Sebadoh loving friends (ok, ALL of my Sebadoh loving friends) have passed the no going out that early in a work week stage, and I was curious how the show would go, especially after hearing about a Fountains of Wayne/Soul Asylum/Evan Dando triple bill back on a Monday night in September that ended up being ½ full. All 3 of those acts had more commercial success than Sebadoh, but apparently Sebadoh breeds more loyalty since The Sinclair was roughly ¾ full, with the majority being older fans, so luckily the Creepy Old Guy Factor was non-existent. 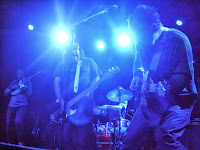 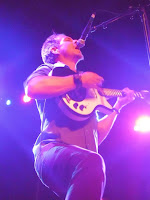 I had never heard of Octagrape before seeing that they were opening for Sebadoh. I meant to pop into The Sinclair maybe half way through their set just to check them out, but ended up in the area earlier than I expected, so I wandered in early while they were still setting up. Seeing as how they sometimes write out their name as “Octa#grape,” I assumed they were kids in their early 20s who’d be rocking ironic hipster mustaches. Instead they were middle aged guys keeping the dream alive. Their set blew me away completely in a way an opening act hasn’t since Spirit Family Reunion opening for two years ago. Their sound blended the sludge of the Melvins with the stoner quirk of Pavement. You’d never know they were from since they had the live energy of Ex-Models. Their love of playing love was infectious, and after three days on the tour, they had sold all but five 7” records. That’s a pretty good sign of a great band. 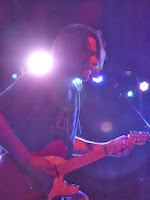 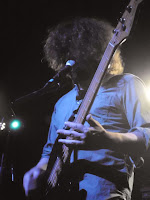 Sebadoh took the stage next. Opening with the first song on their new album, “I Will,” was a bold choice, but it worked and set the tone for the night. Lou Barlow and Jason Lowenstein did their trademark switching instruments and vocal duties. This time around each of them performed 5-6 songs in a row before switching back to the other. They also tended to play guitar on their own songs, and always sang from stage right. This helped alleviate one of Sebadoh’s other trademarks, long gaps between songs. Lou joked about how this always seemed particularly frustrating whenever they were in , but I always saw multiple minute tuning sessions as part of their charm. They also have adjusted some of their older sings a bit for live performances, which is great for fans that have been around for a while. “Love to Fight” was almost unrecognizable, but in a fantastic way. Sebadoh played a marathon set clocking in at nearly two hours, which rewarded the die hards that stuck around well past our normal bedtimes.

Make sure you check out Octagrape. Trust me, it’ll be worth it. Also, head over to Sebadoh’s website for remaining dates on their tour and to purchase their excellent new album, Defend Yourself.