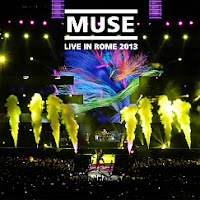 Muse - Live at Rome Olympic Stadium: Muse is known for being a superlative live band, and they've released at least two live albums now to capitalize on it. This is not as good as H.A.A.R.P., but this assumes live albums are anything but inessential. They never capture the true breadth of a live band's performance, and often end up sounding flat and hollow. Good for hardcore fans, but otherwise you should just skip this.

Throwing Muses - Purgatory/Paradise: The first new Throwing Muses release in a long time, it sounds pretty much like what you'd think a Throwing Muses album would sound like today. It's very heavy on the Hersh tones, which isn't a bad thing, but this might be stronger in the multimedia sense, as the physical release comes with a companion book. As a purely audio appearance, though, it's a nice return for a band that's been gone a little too long.

* Black Flag - What The... (see Ken's thoughts on the album cover here)
* Glen Hansard - Drive All Night
Posted by Jeff Raymond at 7:30 AM