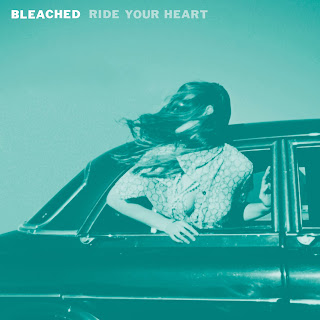 Over the next few weeks, Ken and I will be offering up our best musical stuff of 2013. I'm getting the ball rolling with my #10 album of 2013, Bleached's Ride Your Heart.

I actually came to this album extremely late. This album came out in April, but I don't recall seeing a ton of buzz about it until somewhat recently, when the video for "Love Spells" starting hitting the music blogs. Ken and I have texted back and forth about what this song, and, really, this album is reminiscent of, but I can't really place it. It's not really Dum Dum Girls, it might have some hints of Best Coast, but whatever it is, it's really caught my ear and became a favorite very quickly. They are going to be part of the Weezer cruise this coming February, however, so if that gives you any idea of the sort of enjoyable poppiness that this band is specializing in for their debut album, take that as you will.

Highlights of the album include "Love Spells," "Outta My Mind," and "Dead in Your Head," but the whole album is really high quality. You can stream it in its entirety on Spotify below: