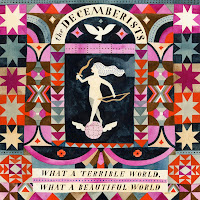 My #2 album this year is by The Decemberists, their latest, What a Terrible World, What a Beautiful World.

This might be a surprise, and I'll be honest, it surprised me too. I loved the album when it came out, it's one of my most listened-to albums of the year, and when I went back to the best albums, this one just ranked so highly. It's similar to Picaresque in many ways, and while they're not quite continuing the trajectory of their previous album, that's not necessarily a bad thing. The soul of The Decemberists is alive and well in this album, from the lighter "Philomena" "Make You Better" a modern take, "Anti-Summersong" feeling more classic. It's an album that works in an era where albums seem to have less and less meaning. I think that matters on a whole, and perhaps my response to this album is a response to that overall situation during this era.

You can listen to the stream below, assuming you haven't already:

Email ThisBlogThis!Share to TwitterShare to FacebookShare to Pinterest
Labels: best of 2015, Jeff Raymond, jeff's best of 2015, the decemberists