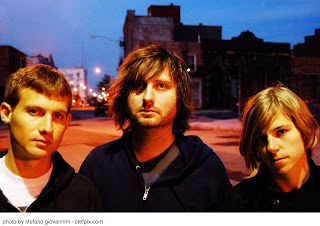 Back in 2006 or so, I was bored at home. I wished I had something to go out and do, but I didn't know of anything, which means I was just sitting around on MySpace. I stumbled across a post that Awesome Color was playing Ralph's in Worcester, about half an hour from where I was living at the time. I had never heard of them, but the ad for the show mentioned they were on Thurston Moore's Ecstatic Peace label. That was good enough for me, and I headed down to check them out.

And what a band they turned out to be. First, all three members adopted "Awesome" as a stage last name. A lot more straightforward than other bands on Ecstatic Peace, Awesome Color were a burst of Detroit protopunk (despite being based in Brooklyn, two members were originally from Detroit so it was quite fitting), only more aggressive and loud. Plus, it's psychedelic as it could possibly be while still being pure rock. Imagine if The Stooges stayed just as heavy on their freak out songs as they did on "I Wanna Be Your Dog," and then add in some 90's Sonic Youth and Dinosaur Jr style noise. That's Awesome Color.

Between 2006 and 2010, the band released three albums on Ecstatic Peace. I can't find much about what they've been up to since, except that Derek Stanton is now in the band Turn to Crime.