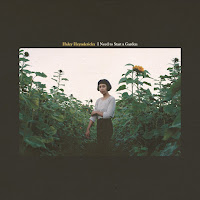 It's that time again where we arbitrarily decide what the ten or so best records of the year are. I'm kicking my list off with Haley Heyndrickx's I Need to Start a Garden. A folk record at heart, this has a little more oomph behind it than you'd initially think it would. My favorite song, "Oom Sha La La," shows (and releases) a bit of the grit and passion that feels held back throughout the affair, making the entire listen not only a great one, but slightly uncomfortable as if you're waiting for that tipping point to happen. In a year with a lot of really superlative folk efforts, it's that added bit of something that sets I Need to Start a Garden apart.

Heyndrickx collaborated on a second album that's worth hearing, but, of all the debuts from this year, this is probably the one I'm most excited to hear about what's coming next. It's a testament to the strength of this new voice on the scene.