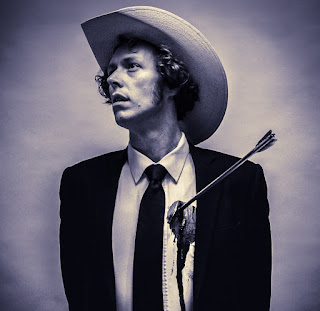 Li'l Andy specialize in a haunting, dark, old style of country that many try and only come off as hokey. Li'l Andy nails this style like few can in this century. His latest single, "Out On the Old Highway," is a heartbreaking song about travelling late at night on rarely used highways. I'll let his press release explain the song:

"A few summers ago, I drove from Renfrew County, Ontario to play a show in Montreal. With no air-conditioning in my car, I decided to make my journey at night.
All throughout that long drive, I kept my eyes peeled for deer, moose, foxes or any other critter that might dart out into the road. Their green eyes eerily flashed by in my headlights as they hid in the bushes along the shoulders of Ontario and Quebec’s less-well travelled highways. Roads with names like County Road 23 or Route 303. Highways no one uses anymore now that newer, bigger stretches of road have been built alongside them.
I could see that these weren’t ghost towns I was passing through – they’re still communities, but are merely a shell of what they once were. Full of failed motels, closed gas stations, abandoned farms. Half-ghosts and towns that have more memories than they do people."

You can listen to "Out On the Old Highway" below. All the Love Songs Lied to Us, the new album from Li'l Andy, is due out on September 20. You can pre-order the album on Bandcamp. For more on Li'l Andy, check out his website.

Email ThisBlogThis!Share to TwitterShare to FacebookShare to Pinterest
Labels: all the long songs lied to us, Ken Sears, li'l andy, out on the old highway