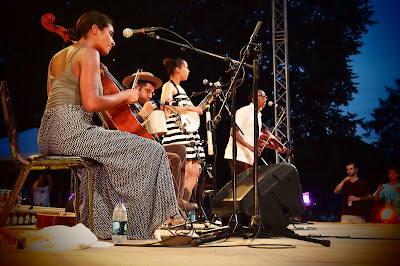 Carolina Chocolate Drops are one of the best live bands out there today. I had heard great things about them, but their albums never really grabbed me. It wasn’t until I stumbled onto their set while waiting for Wanda Jackson at the 2011 Newport Folk Festival that I truly understood them. Once I heard they were playing in a park on the river in , I knew I had to go.

Since the venue is a public park that only charges a modest “suggested donation” of $8.00 for live concerts, you get a really interesting mix of hipsters, families with small children, and retired folks having discussions about spending the day “having a sail.” The Creepy Old Guy factor was, thankfully, non-existent. It’s a very diverse crowd, and I was worried it wouldn’t be in a good way. Carolina Chocolate Drops encourage a certain amount of energy and participation from the crowd. They’re the kind of folk band you need to move to. Once they started playing the first of two sets that night, I realized the crowd was dominated by the type of people that dominated when I first started going: the retired crowd that just wants to sit quietly in their folding chairs and have a pleasant day with no one standing in the way of their view. It wasn’t until the fourth song in the set, the Hubby Jenkins song “Let’s Go Dancin’” that a young boy and his mother wandered out into the walkways leading up to the stage and started dancing. This encouraged others, and soon the walkways and the area directly in front of the stage were filled with dancing hipsters and families. In response, Rhiannon Giddens announced they were adjusting the setlist to reflect the fact that people were now actively listening, and we were all better for it. Throughout the two sets they played that night, the crowd was rewarded with as much energy from the band as they put out. After newest member Leyla McCalla played a traditional Creole song, the dancers took over every area not filled with a blanket or lawn chair. The closing combination of “Hit ‘Em Up Style” and a cover of Johnny Cash’s “” made coming out in the middle of a week-long heat wave well worth it.

One of the best parts of a Carolina Chocolate Drops show is that it’s not just a musical performance but a history lesson. Original songs cover periods stretching from the mid-1800s to 1920s, each accompanied by an explanation of their origins. While introducing one such song, they explained its roots in minstrel shows, and how it would originally be sung in blackface. Sensing the crowd’s unease, they further explained that just because it had dubious origins, it shouldn’t be completely discounted because then you lose the beauty of the song. They also diverged from the traditional southern folk style they typically play. Rhiannon sang a traditional Scottish Highlands folk song, and their hit single “Country Girl” merges a more modern country style with current R&B and hip hop that LL Cool J and Brad Paisley would kill for.

Since this was my first time at the Prescott Park Arts Festival, I have to discuss the venue. It’s absolutely stunning. Located right on the shore of the , you get views of island parks, boats floating by, and a perfectly maintained garden. Even the Portsmouth Naval Shipyard across the river has its own charm. If you’re low on cash and don’t feel like walking by without making the suggested donation, there are still plenty of areas to listen to the music for free, and even watch the show in some cases.

If you’re in the area, check out the remaining schedule for the Prescott Park Arts Festival here. There is a shockingly good selection of bands. Also, please check out the Carolina Chocolate Drops website for more info on them, including tour dates. 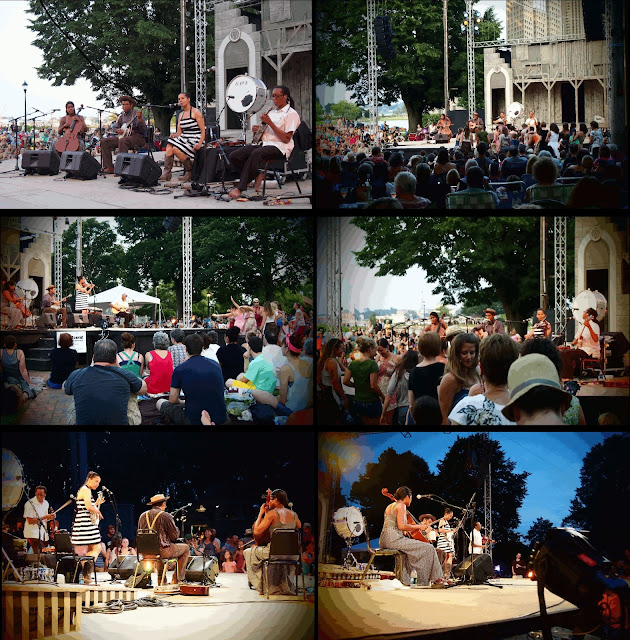