Maybe 10-15 years ago, all the 80s hair metal bands started banding together in package tours, where 4-5 bands well past their prime would reunite (some with only one original member) and head out on the road together. This was done because Poison and Ratt might not be reason enough to shell out for tickets, a babysitter, parking, etc., but Poison, Ratt, Winger, AND White Lion? Now, that’s a bargain! Well, get ready aging Gen-Xers, because we’re now at the age when bands feel the need to do this. I present to you this summer’s 90s package tours.
Summerland 2013: Alternative Guitars
Everclear, Live, Filter, and Sponge 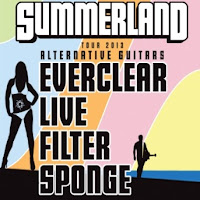 Probably one of the oddest sets to tour together in a long time, this line up just feels like it was whatever four bands signed contracts first. In its second year, Summerland is put together by Art Alexakis, the sole remaining member of Everclear. I think they might have the most hits of the group, so they get to headline. Coming up right behind them is a reunited Live, with Chris Shinn replacing original lead singer Ed Kowalczyk. I’m wondering how many fans know they have a new singer, and how many will even notice. Filter might be the saddest inclusion on this bill. With only singer Richard Patrick, they seem to be the furthest fallen from their arena rock days. Rounding out the bill is Sponge, with singer Vinnie Dombroski as the only original member. At this point, they’re probably just happy to not be playing half empty bars.

While Summerland is all about the (kinda) rock, Under the Sun showcases the softer, more Top 40 side of 90s alternative. The headliner is Sugar Ray (with original members Mark McGrath and Rodney Sheppard). Sugar Ray was on the Summerland Tour with Everclear back in 2012, and the fact that they started their own nostalgia tour has created quite the feud with Art and Co. Looking at the rest of the bill, it is doubtful that Sugar Ray will be pulling out “Mean Machine,” and might just play a 60 minute version of “Fly.” Gin Blossoms (who are only missing their original drummer, but who would have noticed) are one of my personal guilty pleasure bands. I dare you to put on “Hey Jealousy” and not smile. Smashmouth, who might have the most top 40 hits and probably should be headlining, boast two original members, singer Steve Hartwell and bassist Paul De Lisle. They are also one of the worst bands that has ever existed, and will most likely deter any actual “rock” fans from attending. I can’t even remember a single song Vertical Horizon did, so let’s not bother. Opening the show is Fastball, who will probably just be finishing up “Fast Way” just as the first of the fans start wandering in.

Last Summer on Earth 2013 is headlined by Barenaked Ladies (minus original lead singer Steven Page and keyboardist Andy Creegan) are pure pop. I’ve never been a fan, but they have a string of at least five true hit songs, and their appeal can’t be denied. They never really left, so this can’t be truly considered a comeback. The reunited Ben Folds Five (sporting all three original members!!!) doesn’t feel like a cash grab; the success of Ben Folds’ solo career, complete with a TV gig, has surpassed that of his band. Their reunion feels the most genuine, and is probably why last year’s comeback album, The Sound of the Life of the Mind, measures up to their earlier material. Once again sporting all three founding members (a fourth member who joined in 2003 was replaced in 2010) is Guster. Guster is another band that never really stopped making music, giving them actual credibility. Of all these package tours, this one seems more like a collection of friends with previous relationships touring together than an odds and ends package.

Undoubtedly the most eclectic tour, The LP Tour features “four great bands playing four great records front to back.” And you know what? They’re actually right. Big Head Todd & The Monsters will perform 1993’s Sister Sweetly. They were never my thing, but they are alternative blues rock legends, and still have all three founding members. Matthew Sweet’s Girlfriend is a 90s power pop classic. Sweet has been pretty vocal about at least not liking the song “Girlfriend,” so hopefully he has a change of heart since he’ll be playing it every night of the tour. Soul Asylum (with only Dave Pirner as an original member) will of course be playing Grave Dancers Union. It’s a fantastic album, so hopefully whoever the new guys are, they know what they’re doing. Tommy Stinson, formerly of The Replacements, has also left the band after joining in 2005, so that’s unfortunate. The Wailers inexplicably close out the bill. They’ll be playing Legend, the Bob Marley greatest hits album everyone between the ages of 18 and 45 has owned at some point. But without Bob Marley, they’re pretty much a cover band with more cred, albeit a great one.
Posted by Ken at 9:00 AM