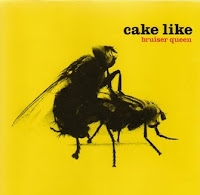 Cake Like is mostly known as the band featuring KerriKenney-Silver (The State, Viva Variety, 911) on bass and vocals. Before you dismiss them as another actor vanity project, keep in mind that Ric Ocasek produced their EP and then introduced them to Neil Young who signed them to his label, Vapor Records. That helps add credibility to any band.

Before forming Cake Like in 1993, none of the members (Kerri Kenney-Silver, drummer Jodi Seifert, and guitarist Nina Hellman) had ever played instruments. This helps give Cake Like a truly unique sound and style. This is indie rock at its quirkiest, with erratic bursts of each instrument punctuating vocals that are usually somewhere between singing, talking, and shouting. The songs tend to be humorous without being outright funny. They’re not a joke band, but they don’t take themselves 100% seriously. Childhood is a recurring theme, with songs about being adopted (“The New Girl”) and forced car rides with relatives (“’s Car”). There are more adult themes as well, as songs like “Cancer” and “Latin Lover” would demonstrate.

The band broke up in 1999 when Kerri Kenney-Silver moved from NYC to LA. She has said that Cake Like still owes Vapor Records another album per their contract, so someday we might get new music from them. You can pick up Bruiser Queen on Amazon starting at $.35. Check out the video for “’s Car” below.