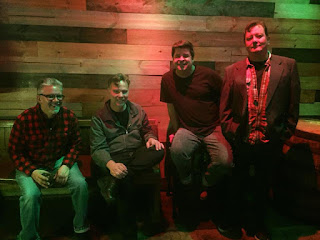 You know how punk, rockabilly, and surf rock share a lot of the same fanbase? The Ziggens are the perfect band for that crowd. The band is set to release their first new album in nineteen years this summer (despite never breaking up) and the first single blends all three genres. This year marks thirty years of being Southern California's "cowpunksurfabilly" pioneers, and if you've never heard them before "Rev It Up" is a perfect place to start. It's a raucous song that starts off punk (borrowing more than a little from "God Save the Queen") and evolves into surf rock with a rockabilly flair. Somehow despite being instrumental (except for a few shouts of "Rev It Up!") the song maintains its punk attitude. Not an easy feat without vocals.

The Ziggens say of the new song:

"Bert wrote this song primarily because the first music he heard as a child was surf music. Growing up in Huntington Beach he feels very comfortable writing reverb-heavy, ocean-influenced types of songs. He was also listening to his favorite surf band, The Sandals a lot around the time he crafted this enthusiastic, robust surf burner. Cars, women and waves!"

You can listen to "Rev It Up" below. Oregon is due out this summer. For more on The Ziggens, check out the band's website.

Email ThisBlogThis!Share to TwitterShare to FacebookShare to Pinterest
Labels: Ken Sears, oregon, rev it up, the ziggens