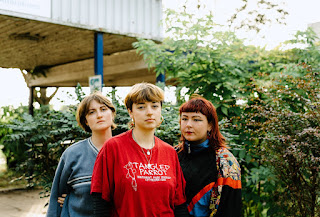 Adwaith says of their new song:

"We wanted to create a big indie pop song that has a melancholy feel to it. It's about being worried that life is going too fast or the worries of a relationship, the overwhelming feeling that you're not good enough and that you are the reason things aren't working out."

You can watch the video for "Wedi Blino" below. Bato Mato is due out July 1 on Libertino. For more on Adwaith, check out the band's Facebook and Twitter. Upcoming tour dates are below the video.