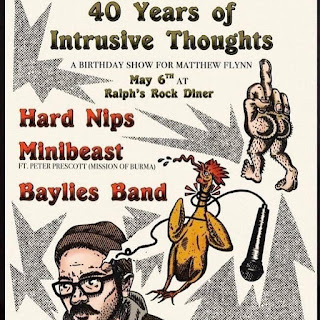 The night had a very laid back feel, more like a party than an official show. Part of this was most likely because I seemed to be the only person in attendance who didn't personally know Matthew Flynn and was just there for the night. Minibeast, led by Peter Prescott (Mission of Burma, Volcano Suns), took the stage as a trio. Prescott took vocal, guitar, and electronic noise duties along with a bass player and drummer. Minibeast take the loops that Mission of Burma trailblazed with and pushed them even further. It was loops upon loops upon loops. At one point in mid song Prescott left the stage to order a drink from the bar, and the song just kept going. It was a high energy performance heavy on noise, but just as heavy on groove. As noisy and experimental as Minibeast may be, they straight up rock. This isn't just beard stroking noise rock, this is dance along (or at least lightly bop around) rock music. Plus, drummer Keith Seidel might be the most talented non-household name drummers in New England. His drumming was an absolute revelation that at times stole the show from all the chaos happening on Prescott's end.

Closing out the show was Hard Nips. The Japanese/American four piece of out Brooklyn truly treated the show as a party. Their music is a bit more traditional than Minibeast, but it's hardly mainstream. They played a set of upbeat party punk that had even the biggest music snobs dancing around. Songs like "Blender X" and "Motto" are perfect fun songs for a party. This is a band that formed before they knew how to play instruments and just for the sheer joy of music, and that love shines through during their live shows. This is a band I once compared to "The Crystals and The Ronettes partying with Blondie and The B-52s," so you're obviously going to have fun at one of their live shows.