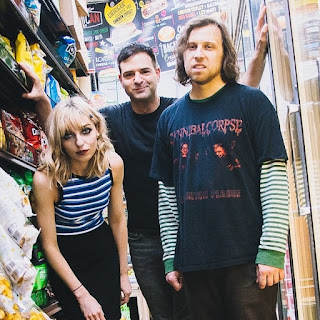 New Haven, CT based Hellrazor started off as a songwriting and cassette recording project back in 2006. Michael Falcone (Speedy Ortiz, Ovlov) posted demos on MySpace and passed around CDRs and cassettes to friends. Now a full fledged band with bassist Kate Meizner and drummer Michael Henss, the band is set to release a new album this summer. "Jello Stars" is their new single, and if you have a certain fondness for the kind of heavy but tuneful alt-rock that came out of Massachusetts in the 90's, this one is going to appeal to you. The song is heavy with that post grunge sound that still has a foot in grunge. But, it's insanely poppy at the same time. It's reminding me a lot of a mixture of bands like Dinosaur Jr, The Lemonheads, Tugboat Annie, and with maybe just a little early emo thrown in there. This is a massive song that a lot of us are going to get really into.

Hellrazor says of their new song:

"We've played "Jello Stars" in our live set since 5 years ago, and most of the song was tracked around then. We recently added more guitars and re-tracked the vocals. Some of the lyrics were revised to align with the dystopian themes on the next record. Most of the song is about ghosts in the machine and paranoia over potentially uncontrollable A.I."

You can listen to "Jello Stars" below. Heaven's Gate is due out sometime this summer. For more on Hellrazor, check out the band on Twitter and Bandcamp.