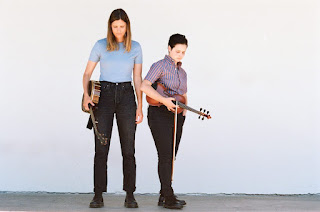 I almost skipped this show. With all of the horrific events of this week, I was in a fog all day Wednesday. I had little to zero motivation to do anything at work and just kind of went through the motions of my daily life. I certainly didn't expect to enjoy myself watching live music, and figured I might as well spend my evening doom scrolling while half paying attention to whatever I watched on TV. But... I headed into Cambridge and it ended up being just what I needed.

Somehow, even though I've been going to concerts in the Boston area regularly for over twenty five years and I've been listening to folk consistently for over ten, this was only my second time going to Club Passim. For those of you who don't know, Club Passim opened in 1958 as Club 47 and is just a legendary folk venue in Harvard Square. It's commencement week at Harvard, and as I walked through groups of graduating students and their parents, their cheer and hopefulness was fairly contagious. I'm a little too pessimistic to be fully cheered up from this, but it was at least nice to see people happy.

Allison de Groot and Tatiana Hargreaves were exactly what I needed Wednesday night. They played two sets. The first was mostly made up of songs from their 2019 self titled album and the second was mostly from their excellent 2022 album Hurricane Clarice. Their banjo and fiddle music just has a certain darkness to it, and sometimes that can be cathartic. The first set was mostly instrumentals, but when you're watching musicians as talented as these two, that's all you need. "I Don't Want to Get Married" was a highlight of the first set. I'm much more familiar with Hurricane Clarice, so the second set was my favorite of the night. "Ostrich with Pearls" was thrilling even without the recorded story from one of their relatives. The duo played a song called "Better Days Coming" that didn't make the album because it was too hopeful. As Tatiana Hargreaves said, "If you want to believe that, be my guest."

Yeah, this kind of musical pessimism was exactly what I needed this week.