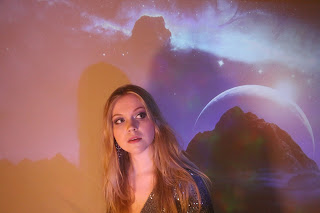 Kentucky's Rhyan Sinclair started off as the singer for All the Little Pieces between the ages of eleven and fifteen. Now on her own as a solo artist, her music can best be described as cosmic country. Based on her latest single, "Interstate Sailors," her sound has elements of classic 70's country mixed with psychedelia, but updated for a 2022 audience. "Interstate Sailors" is an absolute anthem of a song reminiscent of an artist like Dolly Parton meets Stevie Nicks but with the trippy alt-rock edge of early Flaming Lips. It's a song that is almost mainstream but veers off into the odd just enough to keep Rhyan Sinclair's music interesting.

“I think ‘Interstate Sailors’ is about reclaiming your power, in whatever way the listener wants to receive that. I don’t like to take away someone’s individual experience of a song by over-explaining my point of view. For me, when I wrote the song, it was about my career in music and reclaiming my identity, reassessing values. There’s always going to be someone out there trying to coax you out of sticking to your course, claiming their way is better. I wrote the song with the mentality of ‘I’m going to be over here, in this lane, sticking to my course, and you’ll be doing your thing over there. We can all coexist here. This is my ship and I can steer it in the direction I see fit.’ I think that can apply to a whole bunch of different areas of life."

You can watch the video for "Interstate Sailors" below. Letters to Aliens due out March 4. For more on Rhyan Sinclair, check out the artist's website.