The Umbrellas - "Write It In the Sky" 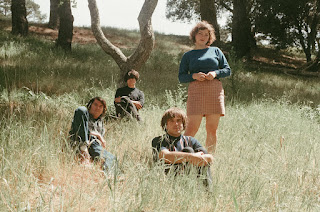 We loved last year's debut album from Bay Area jangle pop band The Umbrellas. Luckily for the universe they're back with a new single. The A-side to their upcoming 7" is "Write It In the Sky," which is just absolutely perfect for all of your summertime listening needs. As you would expect with any jangle pop artist, the song is undeniably jangly. But as sunshiney as the song can be, there is a slight sense of aggression as the song goes on. The guitars move from jangly to buzzy throughout the song, and even end in this near explosion of dissonance at the very end. It's a really fun and unique take on one of our favorite sounds.

The band says of their new song:

"The instrumental and melody for “Write it in the sky” was improvised one morning by Matt. The song makes use of droning via the guitars' A and high E strings. While recording we strived to  create an abrasive but beautiful production. We even have a track of Morgan just making feedback. Nick and Matt wrote the lyrics together. The verses alternate between the two; the first section by Matt, the second by Nick and so on. The lyrics to the chorus were written collaboratively while waking back from taco bell on Geary... repeating different variations until 'write in the sky' stuck."

You can watch the video for "Write It In the Sky" below. The 7" will be out June 24 on Slumberland Records, and can be pre-ordered here. For more on The Umbrellas, check out the band's Twitter and Instagram. Upcoming tour dates are below the video.

Email ThisBlogThis!Share to TwitterShare to FacebookShare to Pinterest
Labels: Ken Sears, slumberland records, the umbrellas, write it in the sky